This Valentine's Day, my husband took upon himself to take me to all my favourite haunts from then to now (and yes, it did include a jewellery store!). This trip down the memory lane began with our college campus, nostalgia gripped me and emotions threatened to choke as we revisited the vignettes of our story. It had been so many years since we had first sat on that parapet, watching a squirrel frolicking around the riotous purple of the blooming Jacranda. Nothing much had changed and yet, everything looked a little different, a lot stranger and totally, alien. Thus, began my reflections on the City of Cities-Delhi; the city steeped in Culture, History, Faith and Heritage and yet, so modern, so contemporary.
Through most of its history, Delhi has seen sundry socio-political upheavals; its been captured, ravaged, brutalised and then rebuilt several times and each time this remarkable city has emerged stronger, unflustered and more vibrant.

Delhi may not be the first choice for the tourists but the traveller in you cannot ignore this smorgasbord of cultures; its a heady potpourri of culture, of romance; of spectacular ruins and vistas of greens, of epicurean delights and street food staples. Delhi as I know it, is not for the timorous traveller, teetering after city guide books and following GPS commands. If you truelly want to get lost in this mishmash of the kitshy and the aesthetic, come, amble along; be a lover of the foot notes and the foot paths and soon you will be embraced in its endearing warmth. The city will enamour you with its lively, over the top, often flashy, seldom subtle attitude. The Qutub Minar, Hauz Khas vistas, the  sprawling Lodhi Gardens and the formidable Red Fort would woo you; the veritable gastronomical delights on offer- from Paranthe Waali Gali, Bittoo Tikki Waala, Karim's to the suave amore' patios, aqua and b bars will lure you.

Shopping is seductive; take a pick from the chic boutiques in Hauz Khas, a bling binge at Lajpat Nagar or the luxe charm of premium malls like Select City Walk and DLF Promenade to bespoke Emporio.

The lush greens that adorn the city scape, the tree lined walkways, the Ridge forest cover, the manicured gardens and parks -are all proof of a green breathing city.
The Lal Quila (Red Fort) ,India Gate, India Habitat Centre and Sirifort Auditorium crank up the cultural quotient of the vivacious city, these places through the years have become a platform for showcasing the stance, the stand and the intellect of people of Delhi.
I am completely smitten by the city, so much in love with it that I am willing to forgive the endless traffic jams, the torturous BRT corridors ( be thankful that the deadly blue line era has given way to the practical Metroline); I am so inured to the dishevelled, unorganised layout that anything more orderly might begin to bother me.
Delhi is a city of many shades, many moods, it is always changing , forever evolving and yet rooted firmly to its rich heritage. Delhi is Eclectic, Eccentric and Electric; come prepared !!

P.S. # Delhi is historically made up of a cluster of cities and thus known as City of Cities. Even today the metropolitan Capital city of Delhi or the National Capital Territory along with its neighbouring urban regions have been given a special status of National Capital Region NCR.
# Delhi is world's second most populous cities.
# Delhi in ancient times is also said to have been the ruling seat of Pandavas of  the mythical Mahabharata, in the name of Indraprastha.
# The Archaelogical Survey of India recognizes 1200 heritage monuments in Delhi of which around 175 enjoy the status of National Heritage Monuments.
# 3 World Heritage Sites, The Qutub Minar, The Humayun Tomb and The Red Fort have been recognised in Delhi besides other monuments of interest like the India Gate, Jama Masjid, Akshardham Temple, Bahai Lotus Temple, Tughlakabad Fort etc.
# Delhi is the hub for tourists going to Jaipur, Agra,Gwalior, Udaipur, Shimla, Manali, Dharamshala or Leh and Ladakh.
# Delhi Haat in Delhi showcases the cultural diversity in terms of handicrafts, curios and food of India, serving as a one stop shop for tourists looking for  local souvenirs.

"I travel a lot; I hate having my life disrupted by routine", Caskie Stinnett

And so on one balmy winter morning, while my husband suggested going to the movies and afterwards a nice lunch, I tried cajoling him to take me for a long drive( some 500kms and 10hrs away) instead. We eventually settled for something inbetween - The Keoladeo Bird Sanctuary in Bharatpur, Rajasthan, a short 3-4 hour drive away from Delhi.
A quick reservation call, some add-ons dumped in my travel ready suitcase, a little cribbing on my better half's part; and we were ready for our jaunt.
KEOLADEO National Park, a UNESCO World Heritage site is touted to be the richest bird areas in the world and is a habitat to rare and endangered species of birds. Thousands of migratory water fowl flock the sanctuary for safe haven during the winter months and if you are lucky enough, chances are you might spot rare Siberian cranes during extreme winters.This expansive avi-fauna sanctuary ironically, was originally, a duck shooting preserve for Maharaja Surajmal of Bharatpur. It is rumoured that in 1938, over 4000 birds were hunted in one shoot alone. It was only after 1964 that hunting was banned here and in 1985 it was declared as World Heritage Site by UNESCO. 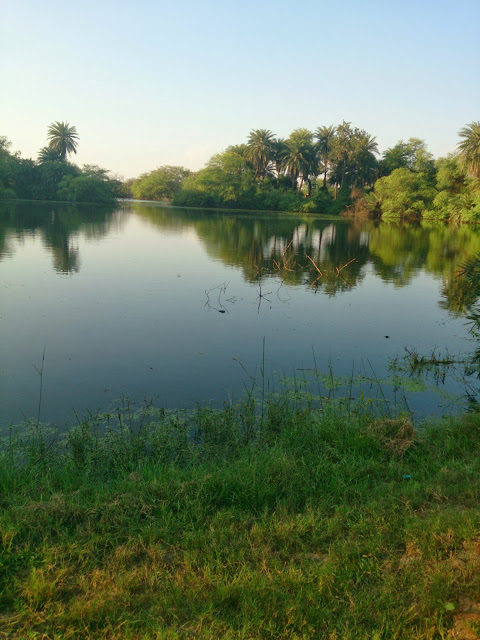 Soon our rickshaw strutted down ( cars/motor vehicles not permitted inside beyond a point) the muddy trail past prancing peacocks and grazing cattle oblivious to the visiting tourists. The chirping of the birds, the tweets, the chirrup, reververated through the solitude. 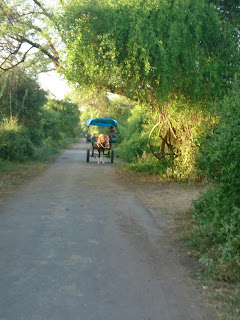 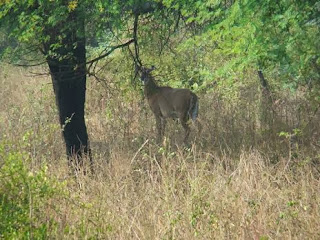 You could spend hours in this beautiful, lush mosaic of grasslands, woodland swamps and wetlands; listening to the cuckoo calling,watching the painted storks nurse their fledglings or capturing a picture of a cormorant diving to prey on a fish! 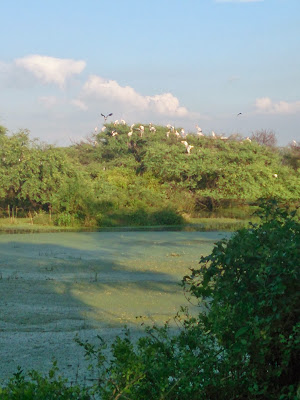 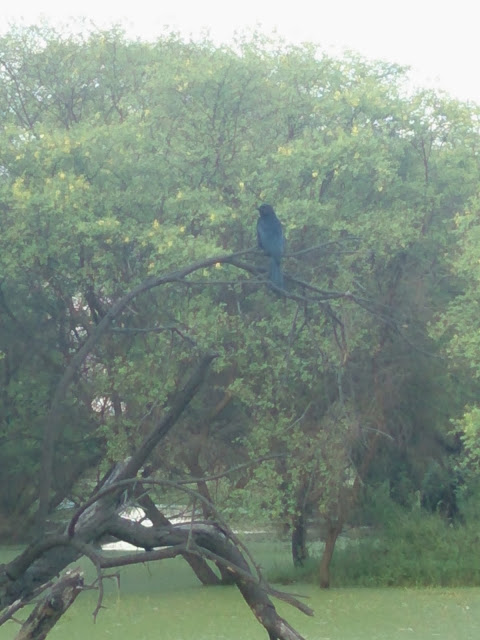 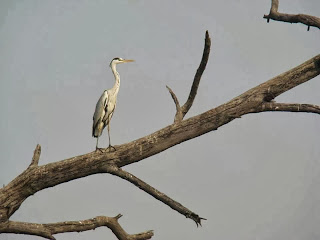 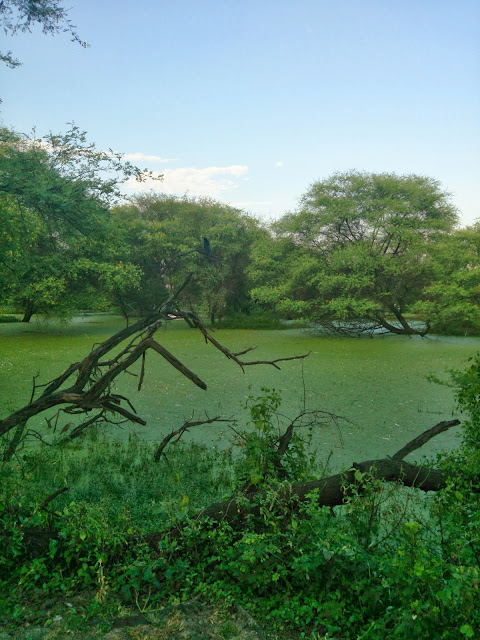 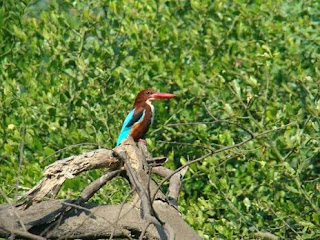 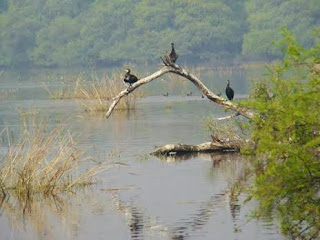 Tired after meandering through the vast stretches of wilderness, playing hide and seek with the elusive deers, trying to locate the camouflaged spotted owl couple, juggling the camera and the binoculars and taking mental notes of the 'authentic' general knowledge our rickshaw puller imparted; we finally headed for our rendevouz with the royalty - The Laxmi Vilas Heritage Hotel, a Palace to the erstwhile king's brother and our abode for the night! 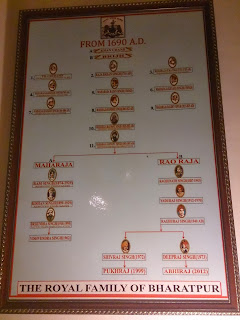 The hotel, though, slightly expensive for the basic amenities it provides ( always remember that the heritage tag discounts for certain level of compromise with blissful luxury), was an experience in itself. Huge chandeliers in the lunch room, quaint lanterns adorning the corridors, stained glass windows and picture galleries speaking volumes of an era gone by- we were bathed in its resplendence, bowled over by its charm. 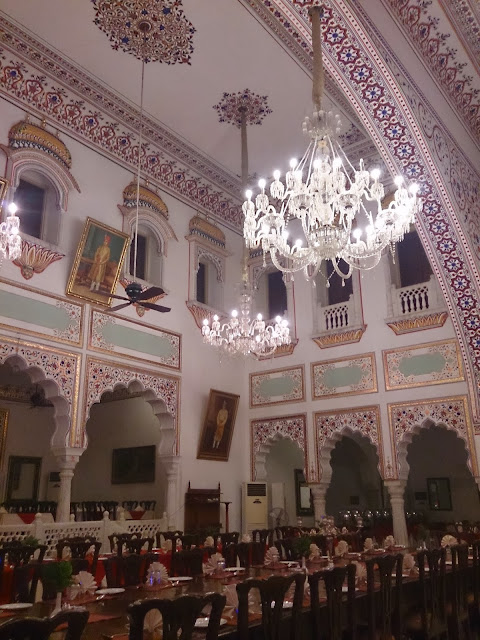 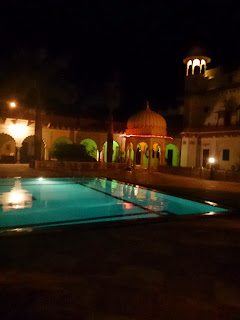 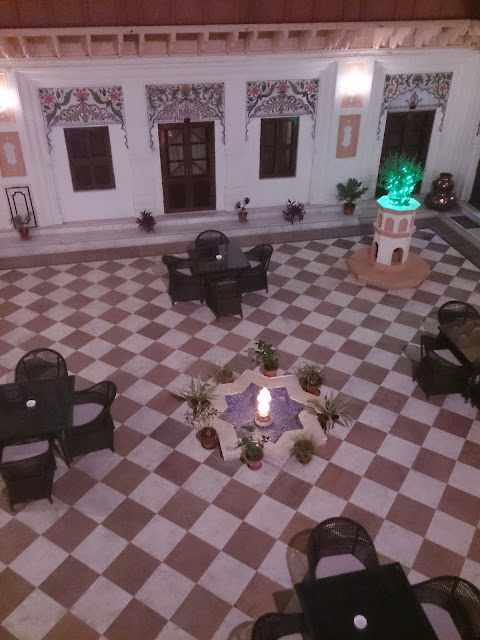 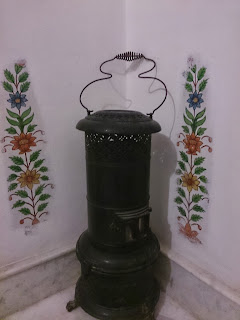 And, we were so glad for this little spontaneous detour of ours. That night, instead of watching the stars on the big screen; we watched the stars embellishing the sky, listened to the chitter chatter of birds returning to their nests and drank in the nectar of life along with the flitting fireflies! 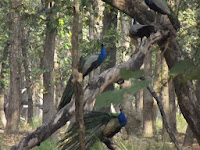 P.S. * Bharatpur, Rajasthan lies on the Golden Triangle Route, enroute Jaipur from Agra, India
*Rickshaws or Tongas have to be hired from inside the sanctuary as motor vehicles are not permitted.
*October to March is the visiting season, though, January is when you can spot the Siberian Cranes
*Over 366 bird species, 50 species of fish, 7 turtle species, amphibians and reptiles besides 379 floal species inhabit the area. Its an unrivalled breeding site for herons, painted storks and cormorants
*Sarus crane with its spectacular courtship dance can be spotted here. Recently, Greater Spotted Eagle has been reported. Great Indian Monitor lizard is of common occurence
*As of now there are very few options of boarding and lodging, though, Claridges chain is coming up with a heritage hotel soon

Dr. Deepti Singh Gupta
A botanist by education, lecturer by profession and Traveller in spirit and soul. Privileged to have a family who shares the passion of discovery and exploration. Besides a number of academic articles published in International journals, a few short travel write ups of mine have made it to magazines and sites like Lonely Planet, National Geographic Traveller, Happy Trips, Make My Trip. I am an avid blogger, a keen traveller and a thorough nature lover.( So proud of my district level awards for growing miniature roses!) I also contribute as content writer for sundry online education programs and am co-founder of an online medical entrance test module site. My association with Rotary challenges me for aggressive social participation, I am a Paul Harris Major Donor and Past President Rotary E-Club,Distt3010. I have now started curating Travel Photography exhibitions in the name of Postcards From Paradise and dream of coming out with a Coffee Table Book soon.